A Rohingya man and his family’s journey to Thailand
Authors: Mohammad and Miriam Jaehn
Languages Known
Burmese, Urdu, Hindi, Arabic, Farsi and Thai
Family
He lives with his wife and daughter. Two of his children are still stuck in Arakan.
Migrated From
Village nearby Sittwe, Myanmar
Migrated To
Thailand
Types of Work
He and his wife sell Thai rotis
Stressors
Habitat Loss
Ecosystems
Urbanized Shorelines
Reason for Migration
War and Conflict

Mohammad is from a village nearby Sittwe. At the time of the interview (2019) he was 42 years old although he is not sure of his birth year. He left Arakan when he was 25 years old because living in Arakan was difficult. His family had been farmers but now live in camps. Mohammad lives with his wife and his 16 years old daughter, in a small two room rented house in Thailand. He has two more children – a 14 year old daughter and a 12 year old son – who are both still in Arakan. He met his wife when he was still going to madrasa (school) and they were married by their parents.  While his family has a farming background, he and his wife sell Thai rotis to gain an income. Both of them learnt the trade only after their arrival in Thailand. They sell their rotis from 4-11pm and can earn around 400-500 baht per day. But it is not a stable income and the rent of the house alone is 5,500 baht per month (including water and electricity). Thus, living in Thailand is not easy, it is hard, but it is already “comfortable” [he used the Thai word sabay which can also be translated as ‘calm’ or ‘easygoing’]. Despite the circumstances, Mohammad feels that he has some happiness in his life because his family is finally with him and they can share the burden. However, he still misses his other two children who still remain in Arakan. Mohammad and his wife have not yet saved enough money to be able to pay for their journey. Even his wife only joined him in Thailand in 2012 and his daughter arrived early in 2019. Both of them came with the help of a dalal (broker, middleman). 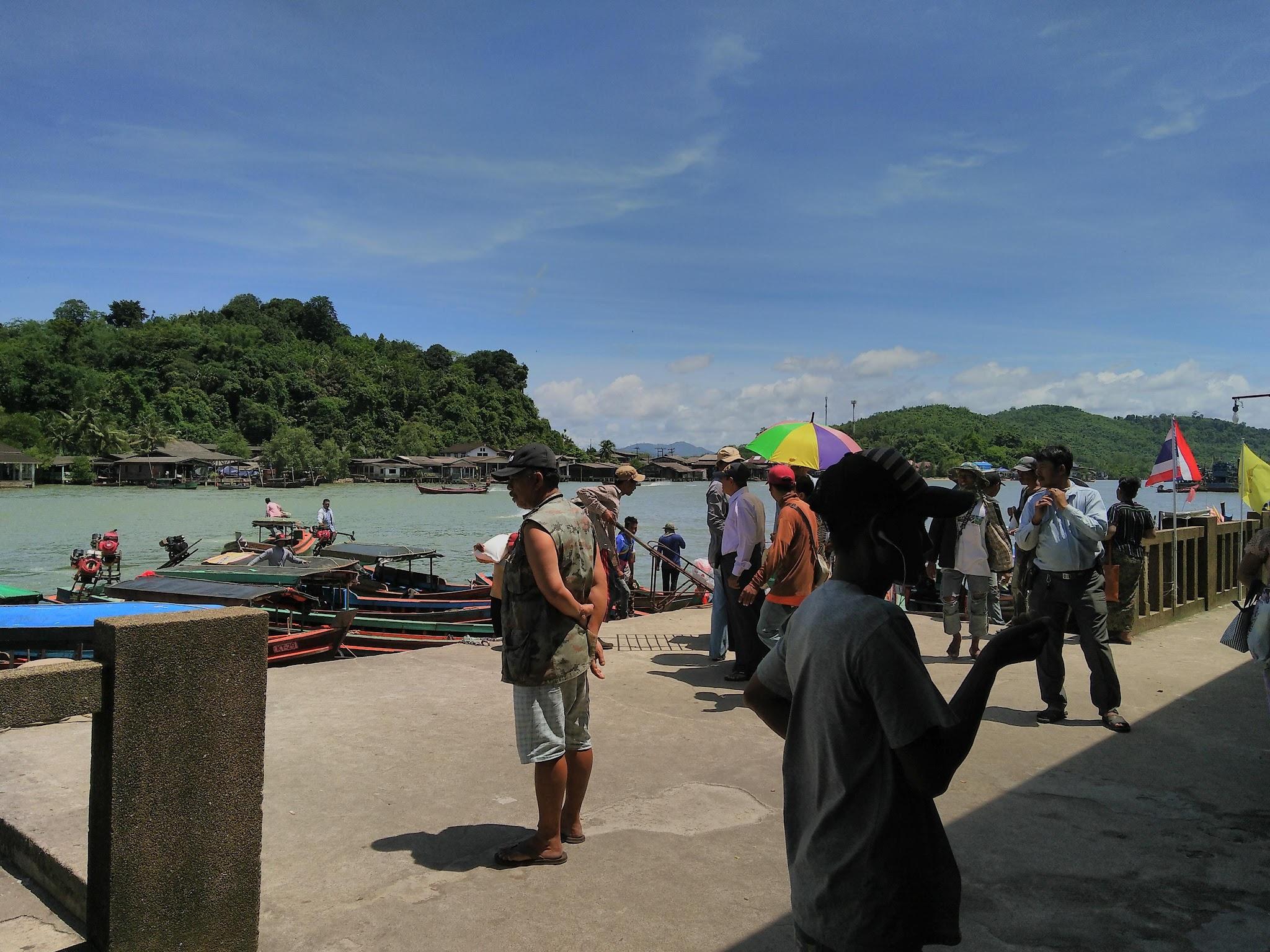 A view of a small port in Thailand along the Andaman Sea (Photo taken by Miriam Jaehn, 2019)

Both of them learnt the trade only after their arrival in Thailand. They sell their rotis from 4-11pm and can earn around 400-500 baht per day. But it is not a stable income and the rent of the house alone is 5,500 baht per month (including water and electricity). Thus, living in Thailand is not easy, it is hard, but it is already “comfortable” [he used the Thai word sabay which can also be translated as ‘calm’ or ‘easygoing’].

Mohammad himself left Arakan by boat. After finishing school and starting a family, he found that raising and providing for his family was impossible without leaving his village. However, he was initially not able to do this because of military restrictions. So, one evening, he and his friends bought a boat and everything that was needed for the journey – such as water, food, and a motor – to leave Arakan behind. When they left, he did not know where they were heading, only that they were on the boat for a long time. In the end, they arrived at a Thai port close to Myanmar where the military caught him and put him in detention for 40 days. During this time, he did not know what to do because he didn’t have any relatives in Thailand and couldn’t call anyone to help him out. But he was lucky; a Rohingya living in Thailand came to the detention centre and ‘bought’ him out of detention by bribing its officials. To compensate for the service and to pay off the bribe that it had incurred, Mohammad sold roti for the Rohingya who had made his escape possible. Although Mohammad couldn’t go or do anything during the time of his indebtedness to the dalal, he felt that the dalal had helped him out of a hopeless situation. Mohammad tried to pay off his debt as soon as possible by living very frugally by spending only as much as necessary to survive. It took him half a year to pay off his debt of 4,000 THB. After he had cleared his debt, his former creditor and dalal helped Mohammad to move to the south of Thailand where he has now lived for many years.

A Rohingya woman’s journey from Arakan to Nepal

Loving, Writing, and being ‘Bihari’ in Bangladesh

Ahmed Ilias is a writer, journalist, social worker and poet. He is a 'Bihari' who migrated from Calcutta in 1953 ...
View Story