Sirajul Islam, born in 1952, comes from a family of honey collectors in Bhekotmari village of Soladana union of Paikgacha, Khulna, in Bangladesh. He started working in the forest with his father around 1975 or 1976. He had to stop his education during 1971.

But about 10 years ago, he stopped going to the forest to collect honey and instead had to start looking for other work options. It was no longer profitable to go, he says, and the fear of being attacked by forest bandits was great.

Sirajul would go into the forest between Baishak and Aswin in groups of 5 or 6 and stay there for about a week collecting honey. But over time the number of attacks by bandits had kept increasing. ‘We could not go there and make any profit,’ he says. In fear of bandits who would take away the honey and beat up the collectors, he explains, the groups would try to keep the collected honey in two separate places, a part on the boat and a part in the forest. He himself had been attacked and beaten up by bandits. In the early days, there weren’t as many bandits. He explains how the older generation had taught them how to go into the forest and do the work. After the older family members had stopped going or had passed away, he had taken up the responsibility. But everything had changed. Besides bandits, tiger attacks have increased. Forests have been cleared by governments in secret, and ‘there are some areas which are so bare that there isn’t even a place for a hive to form.’ So if previously a family could survive on earnings from the forest, he says, today this is no longer possible. 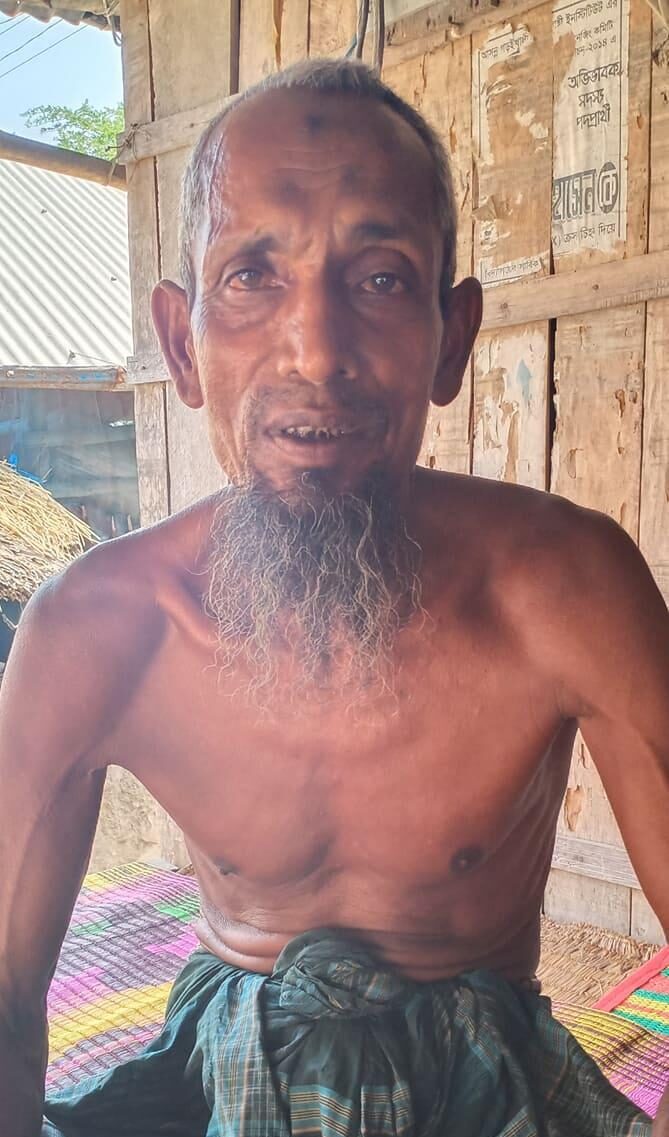 Sirajul would go into the forest between Baishak and Aswin in groups of 5 or 6 and stay there for about a week collecting honey. But over time the number of attacks by bandits had kept increasing. ‘We could not go there and make any profit,’ he says.

A member of the landless organisation since the 1990s, when the anti-shrimp movement started after Karunamoyee  Sarder’s death, Sirajul explains how the increasing number of shrimp farms has also affected the area: one of the reasons there is no work in the area.

Nothing grows in the salt water; there is no vegetation, no scope for rearing animals. Previously, if someone was a big landowner, other people could work in parts of that field and get by, he says.  ‘ now you see only empty stretches, no trees or vegetation.’

So, like most people in the area, he now goes north, to work in harvesting paddy and do matir kaaj in the villages. His work takes him around the Jessore-Khulna area, but he has gone as far as Netrokona in the north as a labourer.

He spends 7-8 months outside working outside his village; some years he would spend the entire year outside the house. Those were difficult days as there were no mobile phones and they (the 5-6 people who would go to work together) would take turns to send money back to their village. He now goes to markets near Khulna, where contracts are made with people looking for wage labourers. Wages vary year to year he says, but recently they have been a little higher, at 4-5K tk per week.

But, he has not been able to take on much strenuous work or go very far for some time. There are mobility restrictions due to the pandemic, but while working around a year back, something stuck his foot. He did not go to the doctor thinking of the money that would be needed. But now the wound had worsened, and it has become difficult for him to move around. He gets by doing ‘easy work’ now, on soft mud, fishing along riverbanks.

Minuti Biswas (50)—known to everyone as ‘Futi’ in the fishing community (jeleypara). She lives in Taiyabpur ...
View Story

Pratap Sarker has seen first-hand how his village has changed over the course of a mere forty years. A resident of ...
View Story